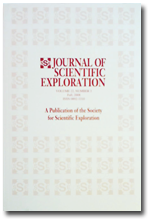 Many traditional Mahayana, and modern Tibetan, Buddhist texts relate meditation attainment to psychic ability.  This teaching served as the hypothesis—that more advanced meditators would choose a psi target correctly, significantly more often than beginners.  A basic free-response design was used in which a computer programme (PreCOG) chose a target picture at random from a 4-picture set.  There were 25 sets, all pictures of Tibet.  PreCOG guided the participants through the procedure, in which they aimed to become aware of the target.  18 participants, Tibetan monks, nuns and Western Buddhist meditators, completed 8 sessions each.  Half the sessions used a clairvoyance, and half a precognition, protocol.  Age and years of meditation practice correlated significantly with the psi scores (Pearson r = 0.52, p < 0.05). This suggests that, as one practices meditation, psychic awareness begins to manifest more reliably.  This result was confounded by a non-significant psi-missing trend.  There was no significant difference between the clairvoyance and precognition trials (t-diff (142) = 0.800). There was, however, significant psi-missing from the group of Rinpoches (t = -2.09, 2tail p < 0.05). The three participants who scored most strongly in the psi-missing direction all reported childhood memories of previous lives as monks in Tibet.